There are a lot of weird fruits in the world. Some worth tasting and to be used for cooking, and others not so much. If you have been on a lookout for a new exciting dish you may have encountered exotic ones such as durian, rambutan and dragonfruit. These may be weird and exotic, but there is plenty more to discover among odd edible fruits. The best part is that the majority of these have a great benefit for your health. Therefore we present six of the worlds weirdest fruits with great culinary benefits. 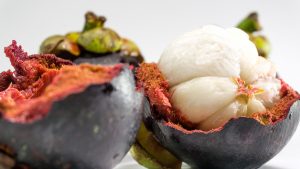 6. Mangosteen – A mix of sour and sweet

The Mangosteen fruit grows naturally in Southeast Asia. The flesh is sour and the flavor combines flavors of lemon, peach, lychee, raspberry or strawberry on top of a base that tastes like honey dew melon. One cup-full can also provide 162% daily value for vitamin C and 46% for Vitamin A while being low in fat at less than one gram per serving!

This divine fruit has a taste that reminds of both chocolate and pineapple. A pleasant sweet combination that is loved by many. The most prominent usage is not totally surprising for desserts. The flesh itself is hidden behind a thick brown shell that has to be peeled off. 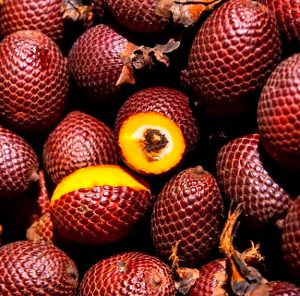 4. Aguaje – Rich on both vitamin A and C

3. Ackee – A Jamaican favorite exotic fruit that you have to know how to cook

The Ackee fruit a weird fruit that originates from West Africa and the fool who was the first to dare to try this very unusual fruit must be given some credit. Ackee is basically a Jamaican culinary delicacy and is part of the national dish of the region. But you have to be careful if you are starving for a taste! Only some parts of the fruit are edible. If the Ackee fruit is improperly fried, the person who eats it can suffer from the potentially fatal “Jamaican vomiting disease”. The name of the ailment will have to speak for itself. 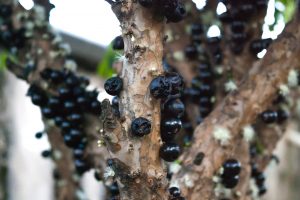 2. Jabuticaba – An unusual fruit that works as an alternative source for wine and liquers

These grape-like exotic fruits grow very bizarrely directly on the trunk of the tree. The bark itself is fully coated with dark blue fruit balls when the trees bear fruit. It is used in South America, where the fruit grows naturally, to produce wine and liqueurs, among other things. 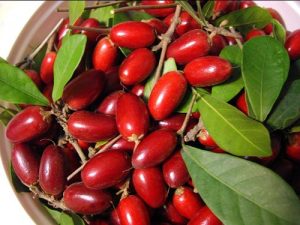 These small berry-like fruits that come from West Africa get their name from the sweetener miraculin. The weird fruits produce a lot of this sweetener and therefore also taste accordingly. The effects will last for up to half an hour and makes lemons taste sweet instead of sour at that time, for instance. Drinking beer along with the exotic wonder fruit should not be a big deal, on the other hand.

We use cookies on our website to give you the most relevant experience by remembering your preferences and repeat visits. By clicking “Accept All”, you consent to the use of ALL the cookies. However, you may visit "Cookie Settings" to provide a controlled consent.
Cookie SettingsAccept All
Manage consent

This website uses cookies to improve your experience while you navigate through the website. Out of these, the cookies that are categorized as necessary are stored on your browser as they are essential for the working of basic functionalities of the website. We also use third-party cookies that help us analyze and understand how you use this website. These cookies will be stored in your browser only with your consent. You also have the option to opt-out of these cookies. But opting out of some of these cookies may affect your browsing experience.
Necessary Always Enabled
Necessary cookies are absolutely essential for the website to function properly. This category only includes cookies that ensures basic functionalities and security features of the website. These cookies do not store any personal information.
Non-necessary
Any cookies that may not be particularly necessary for the website to function and is used specifically to collect user personal data via analytics, ads, other embedded contents are termed as non-necessary cookies. It is mandatory to procure user consent prior to running these cookies on your website.
SAVE & ACCEPT